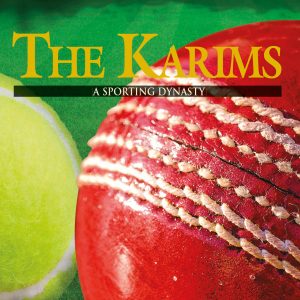 Yusuf Karim majestically ruled the tennis courts in Mombasa and remained unbeaten from the age of 16 to 42 (1951–1977). He also played high-level cricket and volleyball.

His son Aasif effortlessly continued in his father’s footsteps. The youngest prodigy, Irfan, is already shining in the cricket circles, both locally and internationally.

It is very rare in sporting history for three generations to represent their country in international sports.

This book takes us on a journey from where it all began.

He attended Palm Beach Junior College (Florida) between 1981 and 1983, and Howard University (Washington DC, USA) on a tennis scholarship between 1983 and 1985. During the 2003 Cricket World Cup against Australia, Aasif, in a famous performance was declared “Man-of-the-Match” in which he was awarded a gold watch for his efforts.

Aasif also played for the national tennis team and represented his country in the Davis Cup.

In 2000, Aasif founded Sports Monthly, a sports magazine, as his contribution to giving back to society. He is currently a business man (CEO of Aristocrats Insurance Brokers Ltd/Safinaz Group). Aasif is also a qualified and practicing arbitrator/mediator.

This book is for personal use only and should not be distributed, sold or otherwise used for any commercial purposes.